What a successful day the Mancosa [GSB] golf day turned out to be. Great weather, a phenomenal turnout and amazing company.

As the hosts of the day, The Durban Country Club set the scene and golfers were welcomed by MANCOSA staff to collect their registration packs before heading out onto the golf course.

It was a pleasure to host team players such as Shaun Pollock, Cameron Delport and Darren Smith, who participated on the day. Being the hosts to the South African Business Schools Association (SABSA) committee on the 10th September. Mancosa [GSB] directors invited SABSA committee members to participate in the tournament on the 9th September. “Thank you for an enjoyable experience and excellent hospitality I received on the day.” Said Professor Steven Bluen, Head of Wits Business School. The day ended with a gala dinner at which guests were welcomed by Professor Yusuf Karodia. To congratulate players for an exceptional display of golf, prizes were awarded for the following categories; excellent performance, longest day, closest to the pin and longest drive. The top five teams also received awards.

Aimed at stakeholder engagement, the day ended off being an overall success and many memorable memories. 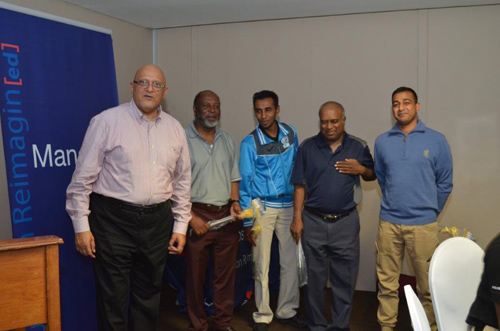 David Minnar of RICOH sponsored a laser printer which was awarded to Dr. Joseph David

PrevPreviousBusiness Women’s Association partners up with MANCOSA to award a bursary to study toward MANCOSA’s Postgraduate Diploma in Educational Management.
NextTraditional Clothing and African Women leadership: Moving from the Margin to the CenterNext